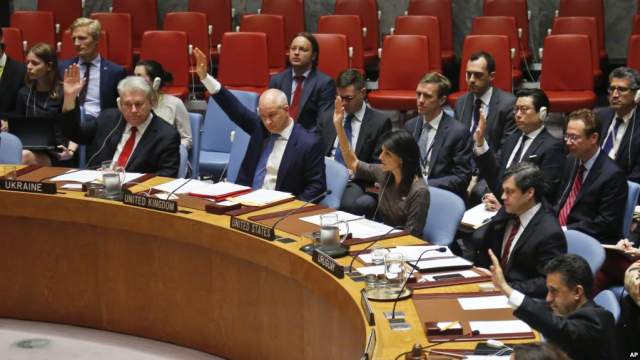 Ambassador Pecsteen, thank you for your briefing today. Your work as the chair of the 751 committee continues to contribute not only to the work of this Council, but also to the international efforts to advance peace and stability within Somalia and in the region.

The seemingly endless cycle of attacks upon civilians, included those cited in the latest POE report and echoed in numerous prior reports from UN experts, must cease in order for Somalia to prosper. I note that al-Shabaab was once again responsible for the highest number of attacks against civilians. We are committed to the 751 Somalia sanctions regime and to using this regime to disrupt al-Shabaab and its ability to conduct attacks against Somali, AMISOM, and U.S. forces.

As part of this effort, we look forward to cooperating closely with the FGS and the international community to disrupt and ultimately eliminate the sources of financing for al-Shabaab and ISIS in Somalia. Al-Shabaab continues to expand its revenue base through extensive informal taxation, and ISIS increasingly uses Somalia as a financial conduit to its regional affiliates. We look to partners to strengthen information sharing on these threats both with the FGS and multilaterally.

As we work to counter terrorism in Somalia, the United States continues to build the capacity of Federal Government of Somalia security forces to secure and properly manage their conventional weapons stockpiles to prevent pilferage and unauthorized transfers. International partners can help by coordinating closely on their respective security assistance efforts with the Somali(an) government. AMISOM and the Somali government should continue working toward a conditions-based transfer of security responsibilities.

Finally, and in complete agreement with my colleagues from Germany and Great Britain, with respect to the Federal Government of Somalia’s non-cooperation with the UN Sanctions Panel of Experts, we continue to encourage Somali officials to engage with the Panel and work to address the challenges – as highlighted by the Panel – that impede Somalia’s progress towards security and stability. The ongoing refusal of the FGS to engage with the Panel of Experts, and to support its work, is troubling. The Panel serves as the eyes and ears on the ground in Somalia and in the region for the Sanctions Committee and ultimately for this Council. We will not ignore, or enable, the FGS’s ongoing efforts to stymie the work of the Panel of Experts.

We look forward to engaging this Council, the Committee, the POE, and our Somali partners, to further the objectives of peace and stability in Somalia and the region, and ultimately to ensure a better future for all Somalis.