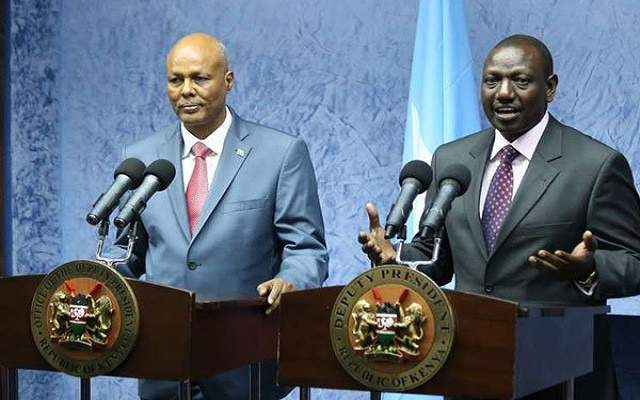 By KEN OPALA DAILY NATION
More by this Author

Kenya bungled negotiations that would have led to an amicable solution to the raging dispute over its maritime border with neighbouring Somalia, the Daily Nation can reveal.

All indications point to the fact that authorities tasked with handling the issue failed to take serious the initial talks initiated by Somalia.

Now Somalia seeks to use Kenya’s own statutes — among them the Territorial Waters Act 1972, the Maritime Zones Act 1989, and the Interpretation and General Provisions Act — to advance its claim for about 150,000 sq.km of maritime waters in the Indian Ocean.

According to multiple interviews and memorials filed at the International Court of Justice (ICJ), the negotiation team led by officials from the Attorney General (AG) and the Kenya International Boundaries Office (Kibo) slept on the job.

And because of this, Kenya now risks losing a crucial chunk of land to its neighbour, and even paying billions of shillings in compensation.

The officials didn’t just dilly-dally and delay; they even stalled the bilateral talks between July to August 2014, and this forced Mogadishu to seek ICJ’s arbitration.

“When the United Nations asked Kenya whether Somalia should go ahead with the case, Kenya said “yes”, and this was a big mistake,” says a source privy to the bilateral talks.

Thus, Kenya allowed Somalia to move to the ICJ headed by Abdulqawi Ahmed Yusuf, a Somali. This appears to have put the nail on any move to have the case settled outside the court.

According to highly-placed sources, Kenyan authorities failed to deploy the requisite diplomatic tools to dissuade Somalia from moving to the ICJ.

”I think we showed signs of naivety at the beginning. There are people who felt it was time to make money rather than pursue the interest of the country,” said the source.

During the negotiations in March 2014 through to July 2014, which understandably gobbled up Sh3 billion, Kenyan delegations would comprise 50 members against Somali’s two.

And because the AG didn’t do much to have the issue resolved amicably and in time, the lethargic Kibo — known to have failed over the Migingo Island issue — seized the opportunity only to later bungle up the negotiations.

“They had a mentality that this was a small case, and that Somalia was a failed State that couldn’t handle the issue,” according to the source.

There must have been disconnect between Kibo and the AGs office then headed by Prof Githu Muigai.

The officers in charge of the negotiations didn’t even send an apology for Kenya’s absence, and when Somalia requested for alternative dates, Nairobi went mute.

The first meeting, on February 19, 2014, was between then-Somalia Prime Minister Abdiweli Sheikh Ahmed and Deputy President William Ruto in Nairobi, followed by a series of others in March and July that year.

“Somalia subsequently made repeated inquiries regarding the status of the Second Joint Report, and sought confirmation that Kenya’s delegation to the next round of negotiations in Mogadishu would arrive as scheduled.

Kenya did not respond; it never signed the Second Joint Report, nor did it send its delegation to Mogadishu for the scheduled talks”, says the Somalia Memorial to the ICJ.

Somalia concluded that further negotiations would be pointless. It therefore took the decision to seek resolution of the dispute in accordance with international law.

Somalia appears to be placing the blame on Kibo Chief Juster Nkoroi, who was the head of the Kenya delegation to the discussions.

Implicitly, were Kenya to lose the case, it won’t be because Somalia will have put up a splendid show at The Hague; it will be because Kenya undermined its own effort through greed, naivety, and sheer incompetence.

Somehow, Nairobi’s approach to the case exposes despair, panic and unpreparedness rather than firmness and confidence, as demonstrated by the recent attempt by the government to have either the ICJ postpone the hearings at The Hague for a year or the two parties embark on fresh negotiations outside the judicial system.